If you missed the first two installments, start here:

For those of you who may not be familiar with Jack Webb & the Dragnet series, CLICK HERE for more information….

From:  John
Subject: Varmints in the garden, Chapter III

Jack Webb: Just the facts, JOHN – What has been going on here?
John W:  Well, Jack you see – these little furry varmints have been eating the melons in my garden – and my poor family is starving as we have no melons – and they are starting to mess with the tomatoes….
Jack Webb: UH-HUH, I SEE – and how many furry little varmints were there? And did they all have fur or were some bald?
John W: Let’s see – there was one last Monday, two last Tuesday, one on Wednesday, another one Thursday and….
Jack Webb: HUmmm. Looks like we might have a pattern here – did you notice anything odd about them?
John W: Now that you mention it, there was something different about the housecat – it looked a little different compared to the possums and made meowing sounds – – growled a lot – even hissed at me. I released it in the yard so it could go home. He shot out of the trap and didn’t even look back…made tracks for home like a bullet. I think he was a very unhappy kitty and didn’t like me much.
Jack Webb: Just the facts JOHN – we don’t need opinions! Anything else unusual?
John W: Well, there was this raccoon in the trap, but I don’t think I would recognize him again. You see, her was wearing this little mask as a disguise…..
Jack Webb: I see – a raccoon wearing a mask – hmmm  – is that unusual?
John W; I think all raccoons wear a similar mask….and they have rings around their tails. But all coons look alike anyway…..
Jack Webb: Careful with the comments, JOHN  Anything else, John?
John W: Well, I want this vandalism stopped and you police should be doing a better job!
Jack Webb:  Why do you think we are not doing our job, John?
John W: Well, so far in one week, I have trapped 6 possums, one raccoon, and a house cat. AND that doesn’t include possum #7 that I trapped last night. That makes the score 7 possums (not counting the babies that were with the one trapped Saturday night), one raccoon and a really peeved housecat.
And the adventures of John & Jack continue……

For those of you who may not be familiar with Larry Connors and Channel 4 News, CLICK HERE for more information…

As you can see there was another crime committed in the garden last night – another attempted melon theft by a masked bandit!  This is getting out of hand for sure. Jack Webb was here a couple of days ago and today I have another theft.  But this time I caught the perpetrator for the police. I have called and called them and still, no one has shown up here to investigate the crime. 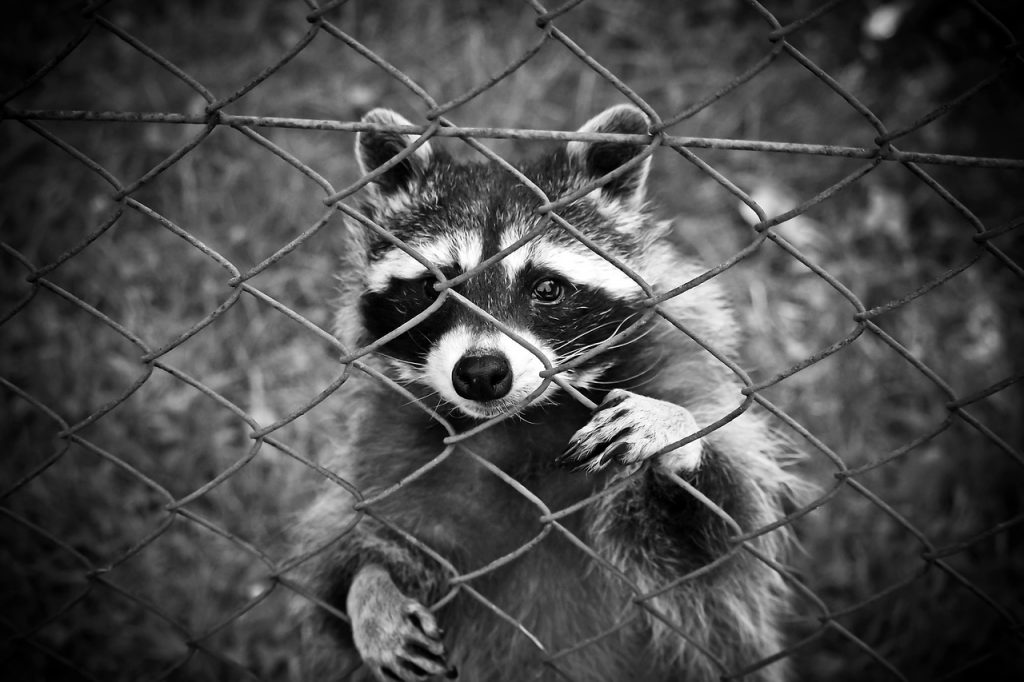 So what to do? Maybe I will call a TV news station to come out and report on the lack of police attention — yeah, THAT’s IT!
JOHN W:  Hello – is this Channel 4 News?
Station person:  Yeah – we’re here whadda you want?

JOHN:  Well, you see I have this varmint in my garden that keeps swiping our goods!

Station:  YOU called me about a bug in your what?
JOHN:  No there is no bug involved- you see, it’s a varmint wearing a mask and he….
Station:  A WHAT wearing a mask?
JOHN:  It’s a varmint wearing a mask and he has a lot of relatives in my area…..
Station:  Relatives – who’s he kin to and how do you know that?  Any mobsters involved?
JOHN:  LOOK – are you interested in helping me with this?  Or should I call another Mickey Mouse outfit – like Channel 2 or 5?
Station:  Call whoever – we don’t mess with relatives! And what do they have to do with varmints anyway?
JOHN:  AAARRRGGGHHH!
JOHN:  Hello- is this Channel 5…
Station:  Please hold – your call is very important to us BLAH – BLAH – BLAH
JOHN:  AAAGRRGGHHH!
JOHN:  Hello – is this Channel 2?
Station:  Please hold – your call is very important to us BLAH-BLAH-
JOHN:  ARRGGHHH!!
JOHN:  Hello- is this Channel 4 News? (Back to where we started)
Station:  (Sweet young voice) Hello -how can I make you day better?
JOHN:  (Ummm Thinking – Naaahh- better not say that.) Hello – I need some help with a HUGE news story that will make your station the envy of all the other muckrakers in town. YOU will be able to shout “YOU HEARD IT HERE FIRST” !!
Station person:  And what is that story about JOHN?
JOHN:  Well you see I have this masked varmint in my garden stealing melons and I have him trapped right now and I am holding him for Jack Webb, LAPD,  but he has not shown up to take him to jail.
Station:  You are holding someone against his will? Isn’t that robbing him of his freedom, JOHN? How can you justify doing that JOHN? That is illegal JOHN!  And you want us to help you by publicizing that crime, JOHN? Sounds like you are the perpetrator – not the victim, JOHN!
JOHN:  ARRRGGHHH
JOHN:  Let me talk to Larry Conners – he will listen as he is a highly trained professional, very experienced news reporter and is of the highest honor and integrity! (talk about an oxymoron! – Shhesh!)
Larry:  Hello JOHN How can I help you?
JOHN:  recites the entire story again – blah – blah Understand my frustration, Harry?
Harry:  It’s LARRY, John and I understand
JOHN:  Well, Harry can you come do a story on this situation and maybe get a fire started under the police to get me some help?
Harry:  It’s Larry, John. And you want me to be a part of publicizing an arson by setting fire to the police station?
JOHN:  LOOK HARRY – you are so far from the truth we are not on the same planet.  Let’s just forget the whole thing and I will just shoot the blasted varmint and be rid of all this mess.
Harry:  JOHN, once more I AM NOT HARRY! _—
John:  Yeah, I noticed that – no hair at all — maybe there is a cure for that – you could have transplants or something…..
Harry:  (Slams the phone down with BANG!)
John:  WELL, so much for trying to talk reason to news people – Boy are they edgy – I’m just sayin’…  Still got no help!
And the raccoon went for a one-way ride this morning.  Maybe I should have dropped him off at Harry’s office… this one weighed in at 26 pounds!  Anyway, the score so far is 8 possums, two raccoons weighing a total of 49 pounds of raw raccoon meat, and one really peeved kitty-cat (weight unknown – didn’t stick around for the weigh-in).
How many varmints can there be out there – at least there is now 11 less than there was two weeks ago. And I will set the trap about dark tonight. A nearby friend told me yesterday that he has caught 13 raccoons this summer and he never baits his trap – they just go in looking for food. Now that is a dumb animal!

Do you ever get frustrated with critters in your garden?  Enough to contact the police or a news station?  Or maybe just enough frustrated to scream? Tell us your secrets… how do you get rid of the varmints in YOUR garden?

« Living Life for 80+ Years: Experiences, Trials and the Good Stuff, Part 2
Letters from John: Varmints in the Garden, Chapter 4 »