A Reminder of World War 2 Rationing

One reminder of the rationing during WW2 is still on the windshield of a 1928 Model A Ford pickup truck that I have owned for several years. The large decal of the letter A meant it was subject to rationing and I also have rationing “stamps’ which were required to purchase gasoline and other items during wartime. These are reminders for me to never forget the veterans who served and protected us and that we should cherish our freedom in the USA.

The 1928 Model A Ford pickup is taken to several car shows and other events each year.  The pickup has won a good many First Place trophies at the car shows.  With the original rationing decal from the 1940’s still on the windshield, several adults and children have asked about it.  That has given me the opportunity to explain to them the hardships of WW2 and the freedom we enjoy in the USA today. We don’t have to “do without” now.  Life here is the best in the world and anyone who wants to enjoy freedom and help the country be better is welcome here.

My History with Model A Fords

I was first introduced to the Model A Fords when I was about 14 years old.  My brother bought a really nice 1929 tudor sedan for $75 which he drove about anywhere.  It had a bad habit of leaking oil, so he carried a gallon or two of motor oil with him.  Later when I was 15, I bought a 1930 Model A coupe for $22.50 and my father towed it home as it had a major engine problem – it didn’t run.  My brother and I took the engine apart and found a broken piston. That was a major problem but repairable.  We went to a salvage yard and took several junk engines apart and finally found a piston of the right size and installed it in my car. The car ran great and I drove it until I went into the Navy in 1954.

The next Model A Ford I owned was a partnership with my older brother. We found a really nice 1931 Coupe in St. Louis that had 61,000 miles and was still owned by the original owner. I located the owner who was 86 years old. He said the car had been offered to a scrap dealer for $25 but they had not yet come to get it. I said I would pay the $25 for it and pay for it today, but he said I looked too young and I might hurt myself with it. YIKES!! I WAS MARRIED and owned a 1950 Ford, had a job, etc. but he was adamant to not sell to me.

Plan B was to have my brother buy the car from him and we agreed to own it 50/50 if we could get it bought.  I was out of the dealing and my brother made contact with the owner about a week later and bought the car for $25 on the condition that he would not drive it until it had new brakes. So we towed it away and about a half mile down the road we put water, gas, oil, etc in it and it started right up. I drove it about 60 miles that day to my Dad’s place and it ran fine. So my brother and I owned it 50/50 for a good many years.

I was transferred to Wichita, Kansas in 1961 and left the car with my brother.  He restored it while I was in Kansas.  Since I was in Kansas and he was in Missouri, about 450 miles apart – and both of us wanted the car – we started searching for a fair way to dissolve the partnership on friendly terms.  We decided to find another Model A Ford in decent condition, buy it on a 50/50 basis and since he had restored the one we originally owned, I would take the one we planned to buy and we would call it even.

The One in Wichita

As you might expect, it took a while to find another car, but we located a 1929 coupe in Illinois and bought it for $225 and I accepted it.  I stored it with my father until I could decide how to get it to Wichita.   After a few months, my father firmly asked that I come get this %%$$##@!! Model A Ford so people would stop asking him to sell it to them.  A friend in Wichita who owned a pickup truck was always up for a little out of the ordinary adventure and agreed to tow the car from Missouri to Wichita for me.  I rented a trailer and we moved it to Wichita where it stayed until 1973 when we were transferred back to St. Louis.

My employer, Continental Insurance Company, did a feature article in our company bulletin on two employee/antique car owners.  I was one of them. 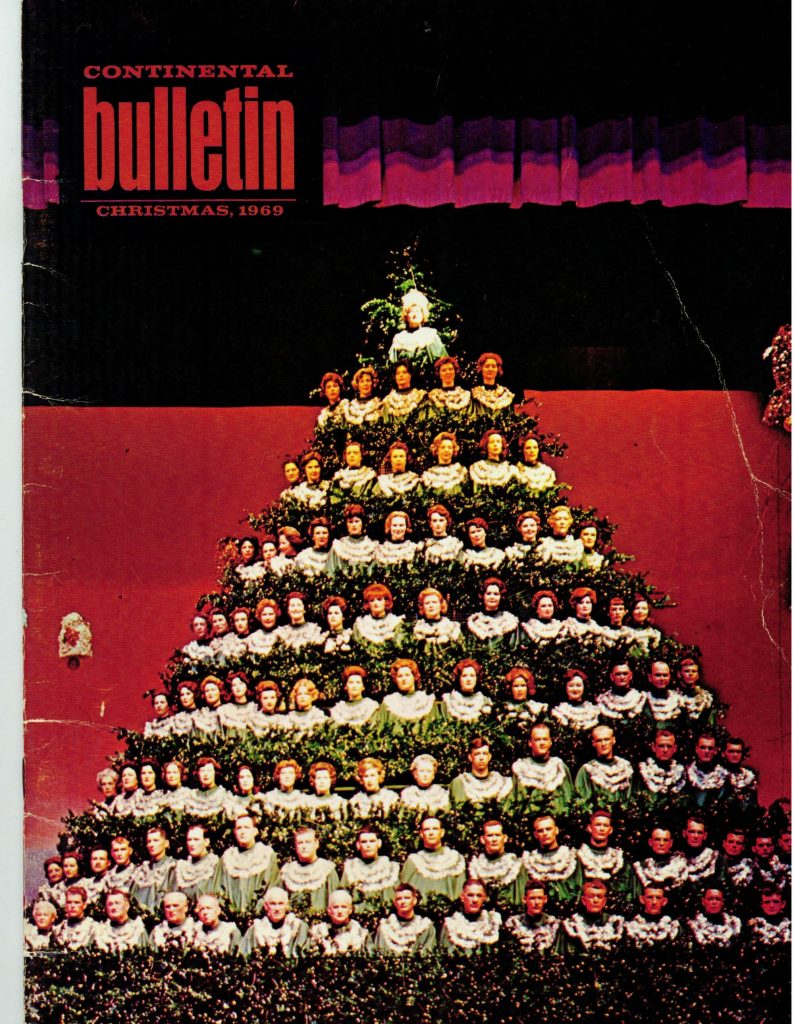 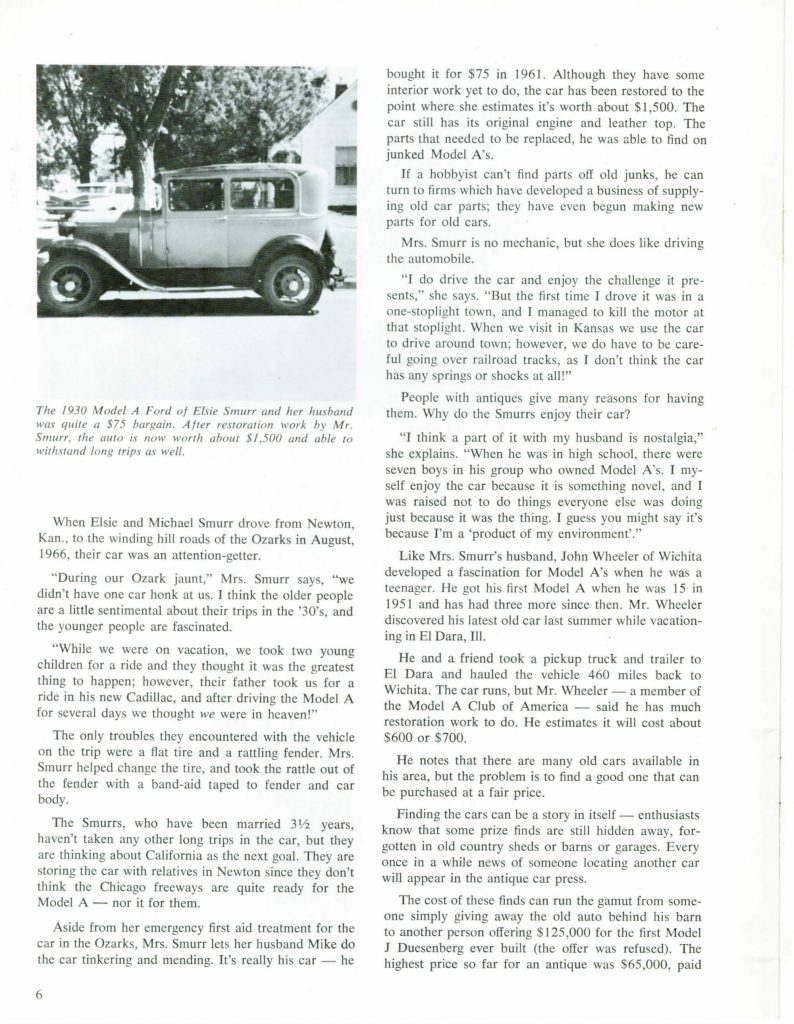 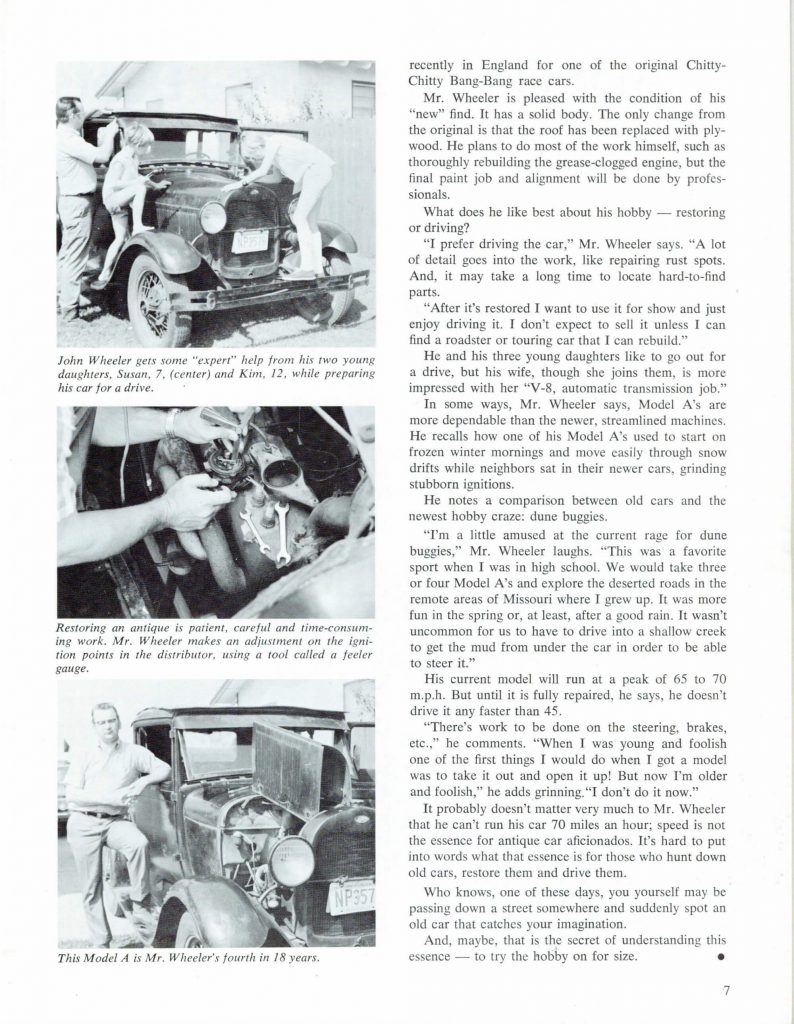 The car remained in my garage for several more years until I retired in 1998 when I started taking it apart for restoration. I completed the mechanical restoration in a couple of years and was planning to attend some classes on body work, painting, etc at the local vo-tech school so I could learn to do the body work.  I had the car running very well and was driving it in our subdivision without a body on it.  A person driving by saw it and stopped by to visit and ended up buying it from me.  He lives a couple of miles away and I see him often.  He completed the restoration and has won several trophies at local car shows.  Find MORE PICTURES OF THIS CAR HERE. 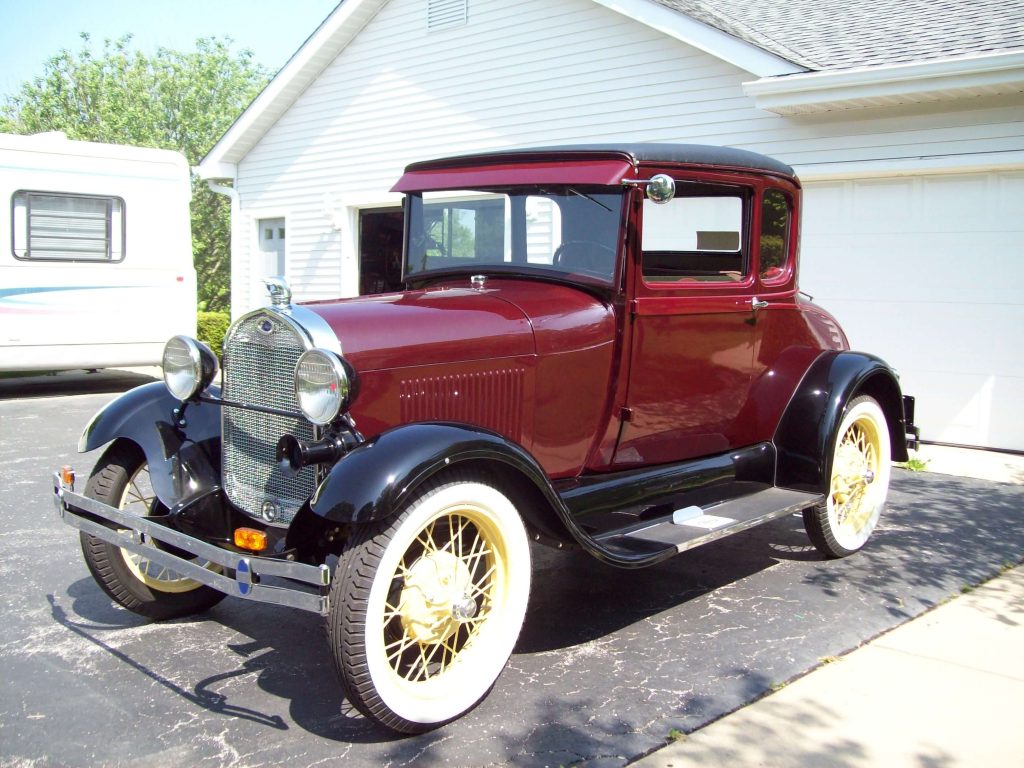 About two weeks after I sold the car to him, a friend who deals in pre-1940’s cars called and said he had a 1928 Model A pickup for sale that I might like. I didn’t want a pickup or a 1928 model.  They are smaller and harder to drive than the 1930/31 models. I declined his offer to look at the car, but he called again.  I ended up buying the pickup since he offered it to me at a very fair price. 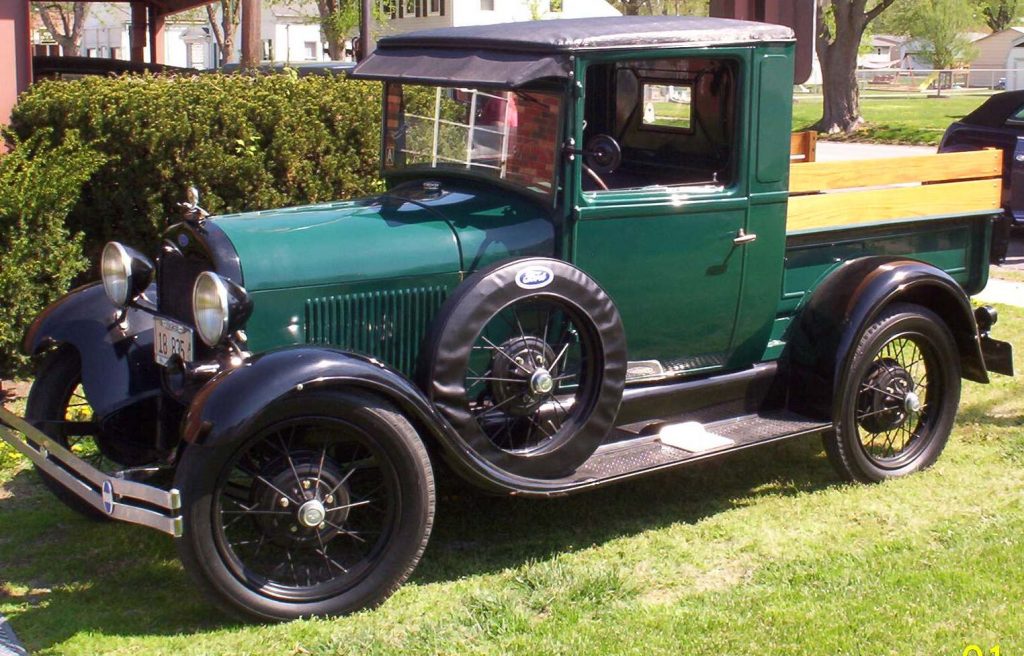 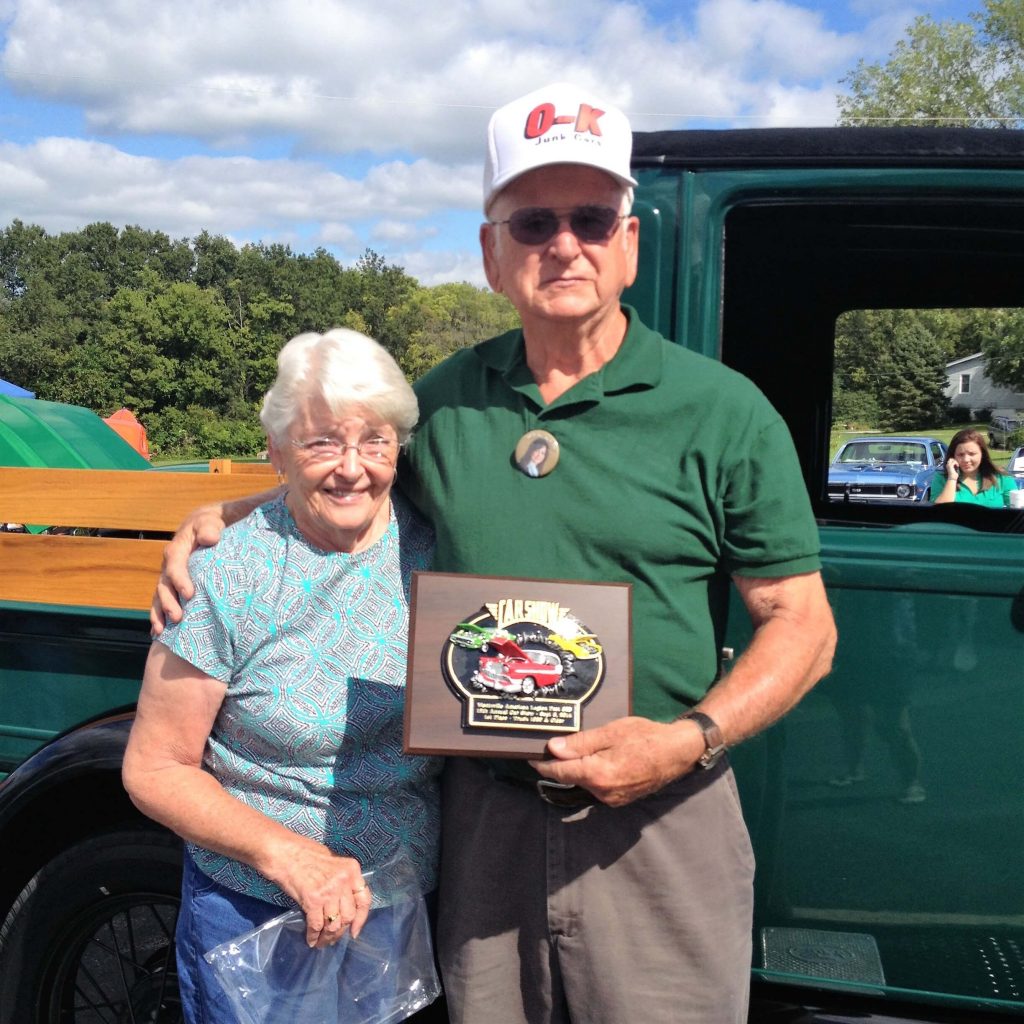 We have owned a 1977 Pontiac Grand Prix for about 18 years. It is an original car with only 25,000 miles on it.  It is also a show car that has many trophies.  Finally, we also own a 1975 Buick LeSabre convertible that was owned by a cousin since new and I bought it from his widow about three years ago. Old cars are fun but my wife does not like convertibles, so the Buick is for sale. 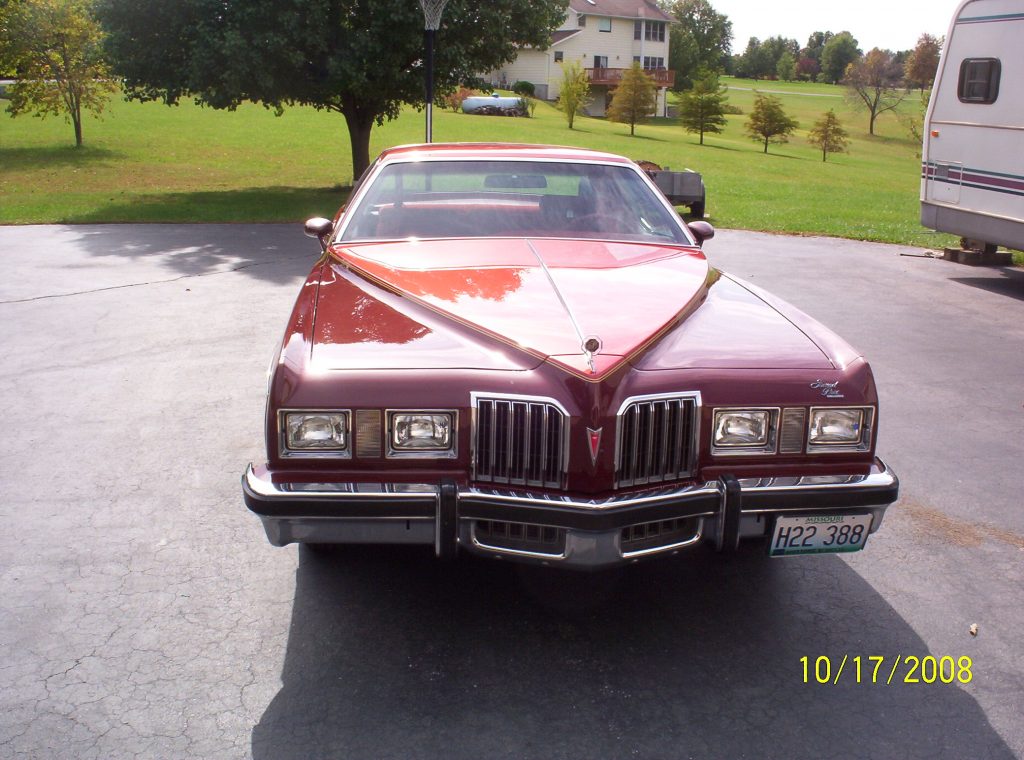 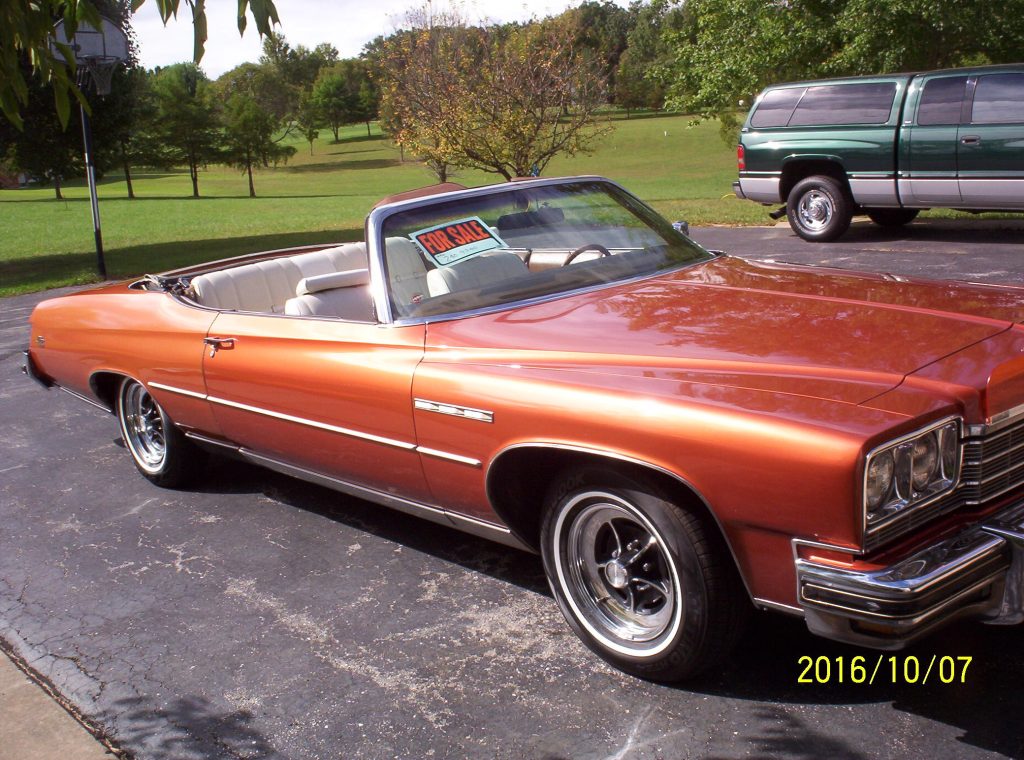 The early 1928 Model A’s are the first Model A’s that Ford built and have several features that resemble the Model T that ended production in 1927.  In reality, there were a few Model A’s made in 1927 but titled as later models.

Model A’s have been in our family for a good many years. They are simple to repair and parts are available at reasonable cost, but they are not well suited for today’s interstate roads. About 40 mph is the limit for cruising in a Model A and that is far too slow for highway driving today, so we drive on the back roads or haul it on a trailer.

If anyone is interested in owning a Model A Ford or any other classic or antique car, please find a local car club and learn about the cars before selecting one to buy.  Clubs can offer a lot of helpful advice on how to find and buy that car you want.  In St. Louis, Missouri area, we are involved in the Missouri Valley Region Model A Restorer’s Club.  For more information visit them at www.ModelAClub.org.

Even at my age of 81, old cars are a fun hobby and a reminder of our freedom here in America.

Here are some personal stories from the Model A Archives.