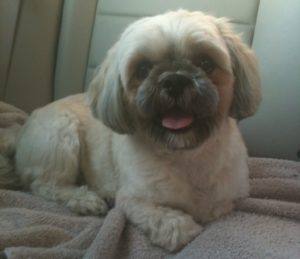 The Background to the Story…

Here is some background information that I should share with you so you can understand my perspective.  I am a very easy-going,  go-with-the-flow, don’t-rock-the-boat kind of girl.  And my sisters, Es & Jay are very persuasive creatures who can usually talk me into just about anything and don’t take “no” for an answer.  I tried to resist their crazy, foolish idea, but they insisted. They pled their case, and I caved.  My husband warned me, but I didn’t listen.  I’m the oldest, and should have known better.  You know that the oldest child is always to blame, or at least that’s how it feels from this oldest child’s vantage point.  So just know this…. It wasn’t my idea, wasn’t my fault!

With that information in mind, the story goes like this.

The Beginning of the End…

It was getting close to Christmas and we had yet to come up with a gift for Mom.   Es had a dog, Simon the Shih Tzu.   Es explained to Jay & I how much she loved Simon the Shih Tzu and suggested that Mom might enjoy having a dog, too.   A dog like Simon, a Shih Tzu that, upon first glance, maybe looked a little like Simon.  We discussed the possibility of adopting a dog for Mom.  We agreed that if Mom wasn’t thrilled with the decision, Jay would take him home to live with her and her family.  That meant that there was an alternate plan just in case Mom didn’t really agree that she needed a dog.  So we decided to go forward with this perfect Christmas gift for Mom.  I bet you can probably see where this is going…

With the green light, Es started scouting around for a dog.  She contacted the kennel where she had found Simon and, as it turned out, they had a one year old Shih Tzu pup named Parker.  He was the cutest little guy, but, for some reason, he had not yet been adopted. To this day, we can’t come up with a reasonable explanation for the rejection he received so early in his life.  I can’t help but believe we were consumed with sympathy, pity and sadness at the possible fate of this poor puppy.   At least that had to have been what we were thinking, right?

Es packed him up and took him to her home.  She had him groomed and sent us before and after pictures. 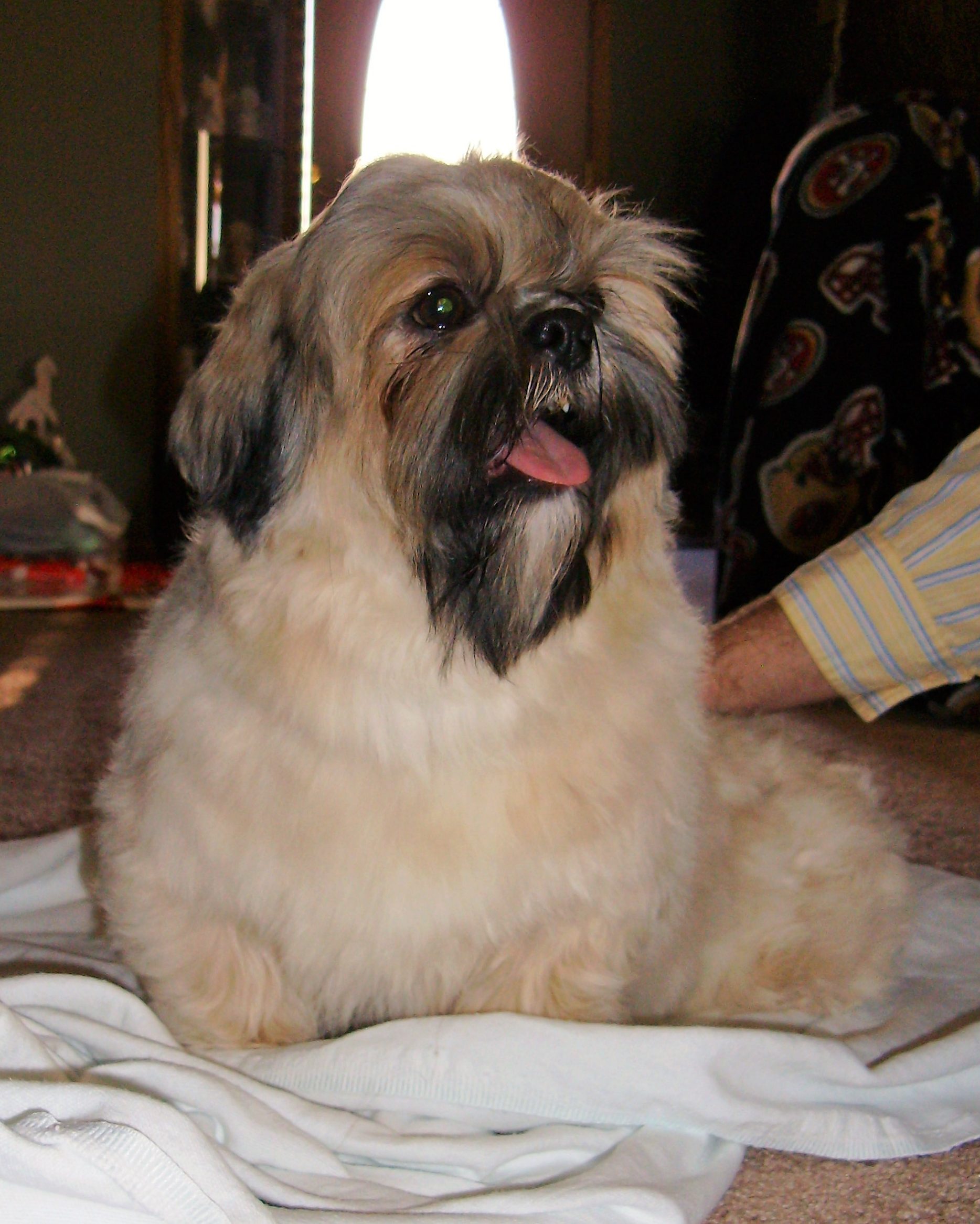 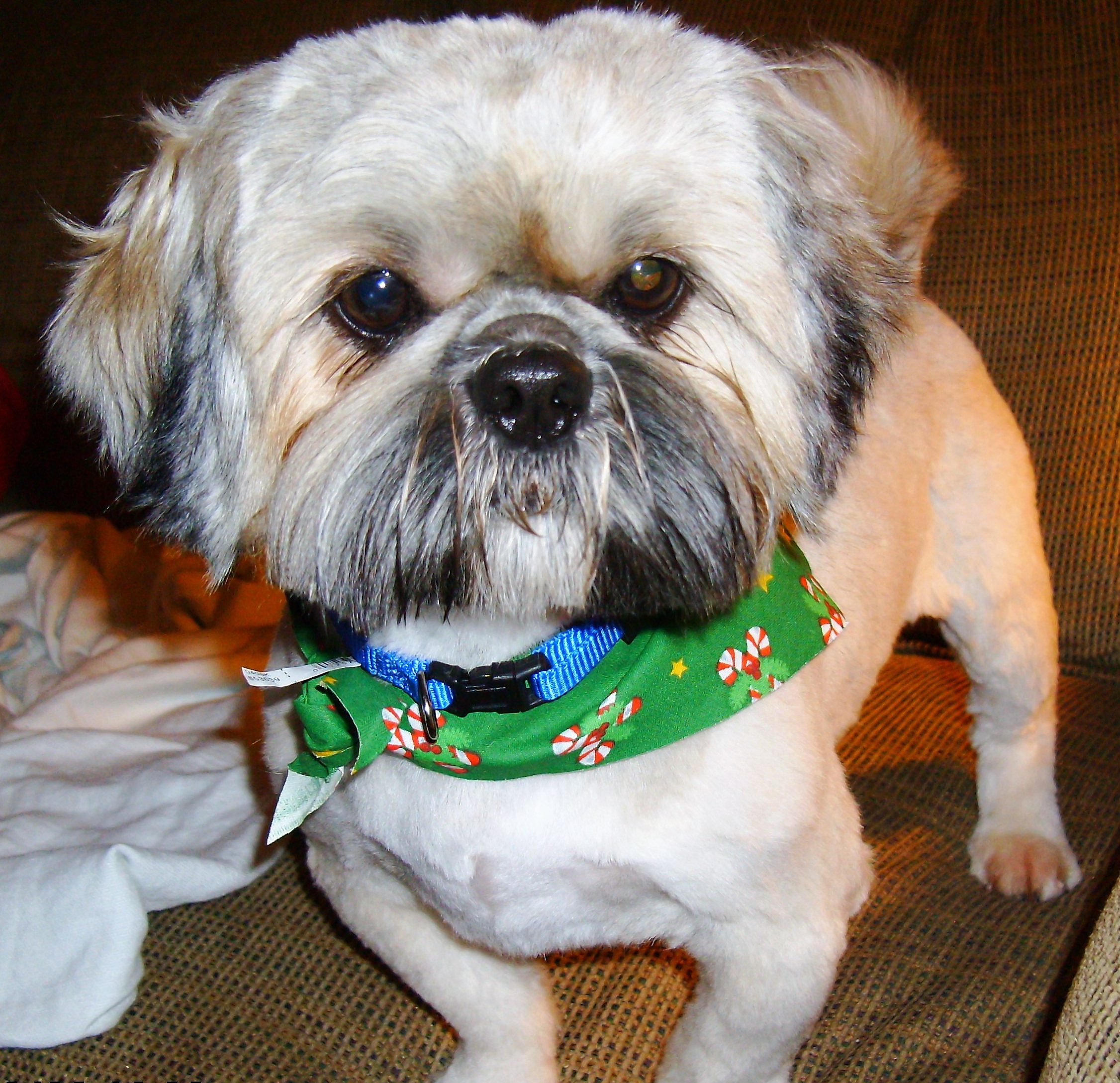 We were smitten!  Jay & I bought an indoor kennel for him, some food, a dish, and a few toys.   We were ready. Two weeks later, Es and her family loaded up the car and made the four-hour drive to Mom’s house, bringing Parker.

Since Jay & I live close to Mom, it was no problem for us to be there when Parker arrived.  We were all anxious to show off our newest family member.

Es always brings Simon the Shih Tzu to Mom’s when she visits.  So when she walked in with a dog in her arms, Mom just assumed it was him. She said “Well, Hi, Simon!” and proceeded to pat him on the head.  As she stood there,  a look of realization crossed her face.  This was not Simon.  Es said “Mom, this isn’t Simon. This is YOUR new dog.  Parker.  Merry Christmas!”.   Silence.  Then Mom started crying,  She was trying hard to smile through the tears.  When she could muster speech, she said: “but I don’t WANT a dog!”. 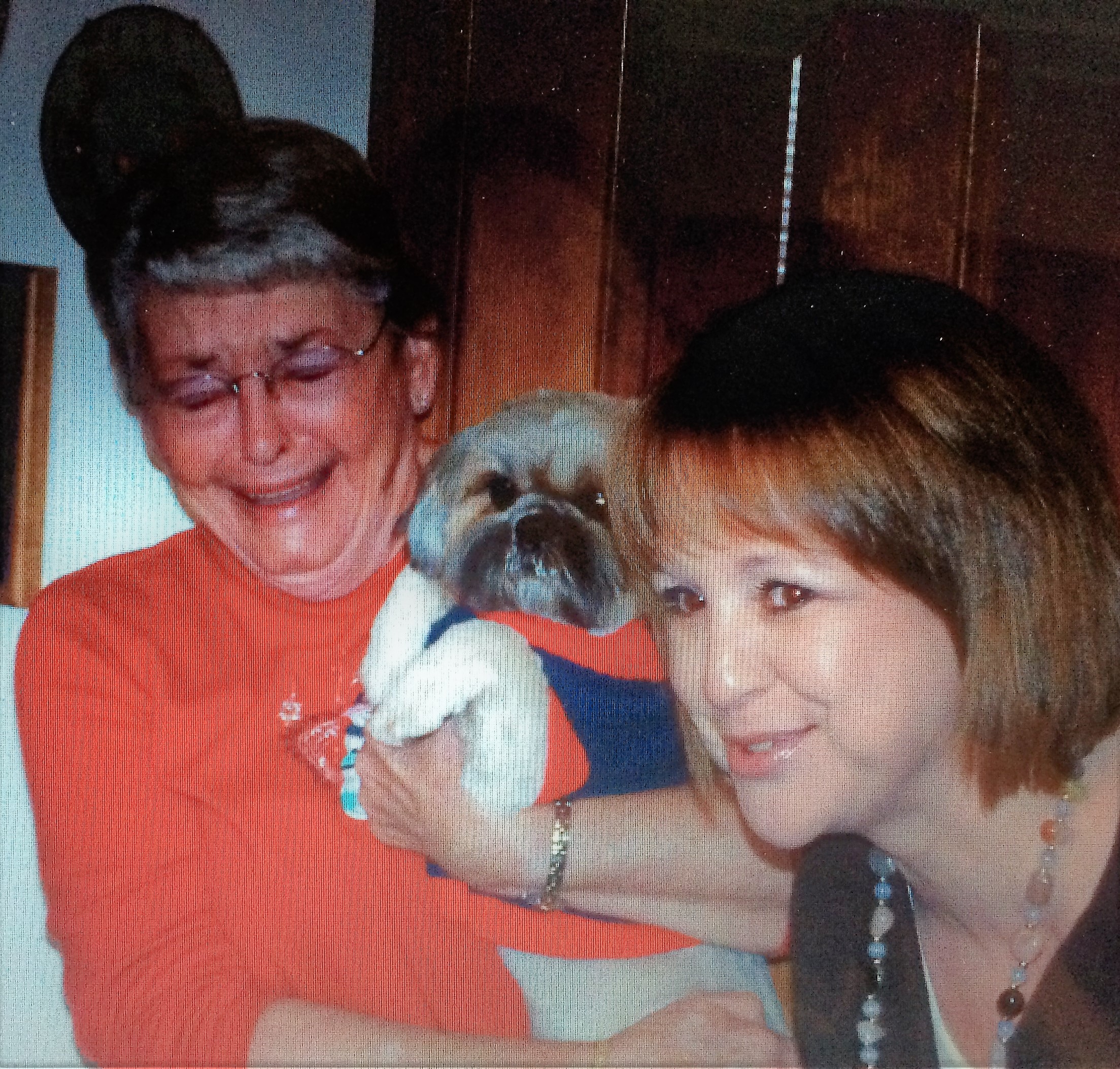 After much persuasion from her daughters and grandchildren, Mom was finally convinced to give Parker a chance.  Stay tuned for the continuing saga that eventually became Parker’s new life….

Parker the dog, was given to Mom for Christmas by her loving daughters.  While not really excited at the prospect of being a new dog parent, she reluctantly agreed to take him for a test drive. Parker sure didn’t make it easy for us to convince Mom to keep him. The morning following his introduction, he needed to go outside, like every dog does.  So Mom let him out.  Parker proceeded to “make a run for it”, and Mom had to chase him down in her nightgown.  It was December in the Midwest, so outside really wasn’t a place for a 70+ years old woman to be running around in her nightgown.  To say the least, she wasn’t very happy with him. Later that morning, he was put in his kennel and his new parents left for church.  They returned a few hours later to a freaked out dog who had managed to do his business, ALL his business, in the kennel.  He was a mess, with his business all over himself, all over his blanket, and all over the kennel.  The kennel had to be cleaned, the blanket washed, the dog bathed.  Still, she persevered for a total of two weeks.  Then she called Jay & I to come get him…  It was overwhelming and more than she could or wanted to handle.

It’s All Over But the Crying…

We went and rescued Parker, I mean Mom, from the situation.  Jay had already made an appointment at the vet for neutering, so we proceeded with the plans for the procedure.  I assumed everything was kosher and Jay was going to be his new mom.

Boy, was I wrong!

Parker needed a new home.  Jay had taken him from Mom and dropped him off at the vet’s office for neutering.  I assumed that she was planning to keep him herself when that process was over since that was the deal we had made beforehand.  But that was not to be. Jay called me.  She had found a new home for Parker.  Shay had agreed to take him.  There was only one problem.   She couldn’t pick him up for a week, and Jay didn’t want to keep him since he was not yet house broken and no one was at home at her house during the day.  Since I work from home, it was suggested that I take him in until Shay could come for him.  Now,  I’m a cat person, always have been a cat person, but I reluctantly agreed.

A week later, Parker went home with Shay, who is a nurse on 12-hour shifts and lives in an apartment building. (I wasn’t aware of that until after he was gone from my house.)   Based on those facts, there is already a good chance this won’t work out.  Bless Shay’s heart, though, she did all she could.  Parker didn’t like being alone, so he barked.   And he barked.  The entire time she was away at work, he barked.  Neighbors complained so she took him to doggie daycare a few times.   Unable to figure out why he was so unhappy alone, she sent Parker to a doggie psychiatrist who diagnosed him with separation anxiety.  Surprised?  No, not at all.  Two weeks into his stay with Shay, I got the call.   “I love Parker to death, but I just can’t keep him with my present situation.”   Should have seen that coming. Now what?

I Told You So!

At this point, Parker had spent a year in a kennel without being adopted, two weeks at Es’s house, two weeks at Moms, to Jay’s, to the vet, a week with me, and two weeks with Shay.  What was I going to do?  Shay was bringing him back.  I couldn’t bear seeing him passed around anymore.   Parker was returned to me and after a back & forth discussion with my husband, who had “told me so”, we went ahead and adopted Parker.  After being with him and getting to know him, we felt he needed a new name, a fresh start.  He was so loveable and reminded me of Clark aka Sparky on Christmas Vacation, my favorite Christmas movie.  Parker became Sparky.

Sparky has turned out to be an awesome dog.  He is on my heels where ever I go and sleeps under my desk when I’m working.  He has been a great companion for me.  Mom visits him on occasion and insists she loves him, but still says “I don’t WANT a dog!”  And that’s ok with Sparky & me.