A Model A and the Mischievous Boys Story

It seems there is always one more story from years ago about Model A Fords and my daughter Kim seems to enjoy them. This one does not involve a Model A that I owned, but one that was owned by an older man who I knew when I was a teenager growing up in a small Missouri town.

B.T. (the owner, name changed to protect the innocent) was a rather grouchy old guy and had lived alone all the time I knew him. I was not aware of any family he might have been connected to, but many years later in life, I met a nephew of B.T.

B.T. was the owner of a dilapidated 1930 Model A Ford coupe as his only means of transportation. This car should have been junked long ago. But he drove it for years.

Sometime earlier in his lifetime, he had lost his right-hand thumb and all fingers on his right hand except the index finger. We all thought that one finger was exceptionally long as it was the only finger on that hand.

About The Model A Ford:

B.T. drove the Model A anywhere – including trips to other towns a good many miles away. The Model A had a spare tire mounted on the back of the car, but one spare wasn’t enough for him so he added two more spare tires to the rear of his car and tied them on with wire. He rarely ever spent any money for upkeep on the car, so its’ condition and reliability was somewhat questionable.

B.T. was not married but he did have an interest in the ladies around his age, which we all thought must be in mid-70’s or more. Occasionally he would visit Clark’s Service Station which was also a pool hall, beer tavern and local gathering spot on Friday and Saturday evenings.  B.T. would tell some small bits of enhanced information about women he dated – or who were interested in him as a prospective mate. Somehow none of us ever actually saw any of these women and the locals chided him about that – “bring one of the ladies here sometime, B.T. – we would like to meet her..” was a common request to him. 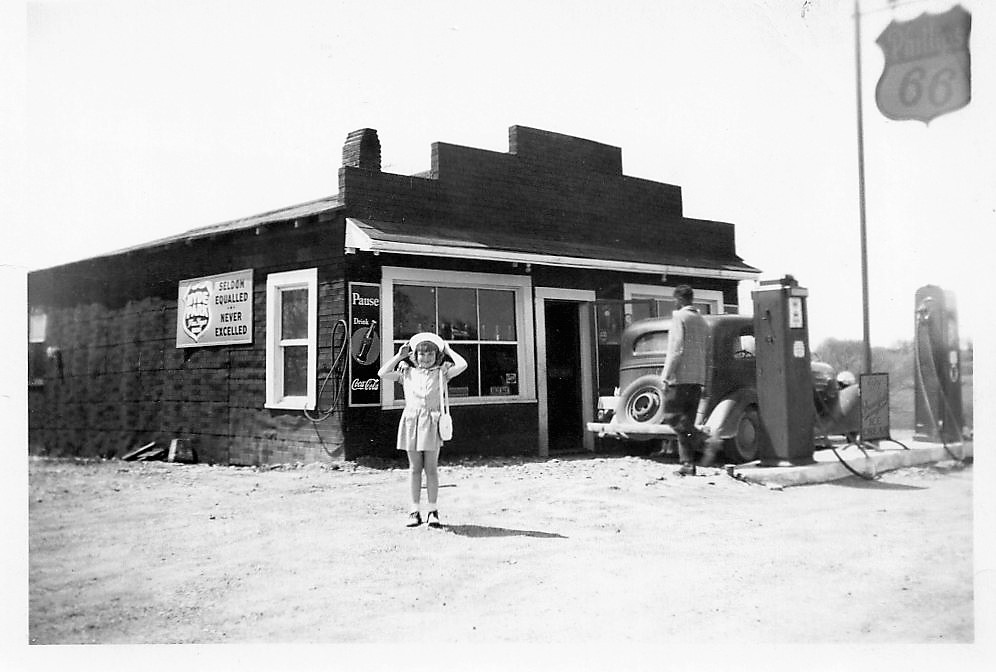 Finally, B.T. announced he would be bringing his favorite lady to Clark’s Service Station (aka Thornton’s Place) on a Saturday night to watch wrestling on the small TV set mounted on the wall there. Remember this was in the 1950’s and TV was a brand new form of entertainment and color TV was unheard of then.  If I remember correctly, this was a13 inch screen Philco TV.  The reception was not so good, but it was all we had to do on Friday and Saturday evenings.

Well, the big day arrived and Thornton’s Place was full of locals as we all wanted to see the lady friend who B.T. had said was wealthy and was interested in him. She actually showed up and was rather friendly. She managed to sit on a bar stool like a professional – and she could handle a beer bottle with ease –  in fact, she seemed rather familiar with beer bottles and bar stools.

It was summertime and she was dressed in a considerable amount of makeup, orange dyed hair, and a fur coat, but she was friendly – and overweight. I could go on here, but why?

A couple of other guys and I decided this could be some harmless fun – but how? Here is the lady we have been waiting to meet – and here is B.T. in all his best clothes, and they are drinking some beer – too good to pass up.  We decided that since B.T. had parked his Model A outside, pointed down a hill on a gravel road, we could use that to annoy B.T. – just a little bit.

We knew the TV wrestling would end at 10 PM and B.T. would be escorting his lady friend home in his Model A, we decided to raise the rear wheel of the Model A just off the ground so it wouldn’t go when he tried to drive it. Four of us lifted the back of the car up and set a concrete block under the rear axle housing and the wheel was about an inch off the ground. That was just enough to keep it from moving when he put it in gear, but not enough to be easily noticed in the dark parking area. Then we waited……

Sure enough, right after the TV wrestling ended and we were all outside watching, B.T. escorted his lady friend to the car, opened the right side door and got her inside.  He entered the driver side and started the engine. Remember they are leaving a bar, it is dark and the Model A is headed down a small hill on a gravel road.  B.T. put the car in gear, and tried to move out – but it didn’t go.  He accelerated a little more – still no movement – so he raced the engine and the rear wheel was spinning fast – and someone in our crowd pushed the car off the concrete block and it shot down the gravel road in a cloud of dust and engine smoke.

Well, B.T.. had not yet turned on the headlights which are controlled by a switch in the center of the steering wheel and he had only one finger on his right hand. He needed one hand to steer and the one finger wasn’t enough to turn on the lights, so he had his hands full. He finally got the car stopped about halfway down the hill, got the lights turned on and started backing up the hill.

When we saw no one was hurt, it seemed like a good time for all of us to get out of there – which we did in rapid order.  Thornton Clark (owner of the service station/tavern) said B.T. was really not a happy camper when he got back to the station and made several threats toward whoever might have done “some trick” to his car.  And the lady friend was not happy with B.T. either.  Not only could she handle a barstool and a beer bottle, she could also swear!  Thornton thought it was really funny, but had to listen to the ranting for several more weeks.  We never saw the lady friend again and B.T. never mentioned her.

Reflecting on the Incident:

Well, while there might be some humor in this true story, I did realize later someone could have been injured so we didn’t do that one anymore. I am sure Thornton Clark (station owner) could identify all who were involved in the prank that evening, but I doubt he ever did.  A few years later, I married the oldest daughter of Thornton Clark and that was 61 years ago.

Had we done all these things in today’s world, no doubt we would have been jailed and considered delinquents forever.

More from the Archives:  In the Company of Frogs