If you missed our first installment, you can catch up here:

From:  John
Subject: Varmints in the garden, Chapter II

Since the story is not yet over, it seems appropriate that there should be a follow-up to the last e-mail about varmints in the garden.

Last night we set the traps about dark as we have every night this week. About midnight and before going to bed, I checked and we had caught small Possum #5 in the large trap. The small trap

had been sprung but was empty. I looked around in the wet dirt for tracks but didn’t see anything new, so I carried the possum #5 to the house as I didn’t want other animals bothering it. 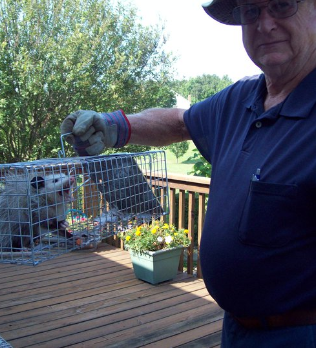 Varmints in the Garden, Unhappy Possum #5

To re-bait the small trap, I used some rather strong-smelling baloney as part of the bait. I added some watermelon, cantaloupe and some old lunch meat which seemed to work well other nights. I reset the trap and went to bed. About 6 AM, I went to check the traps and could see something in the small trap – and I could tell by the growling, hissing, moaning, and downright grouchiness that whatever it was – it was not at all happy about being confined. 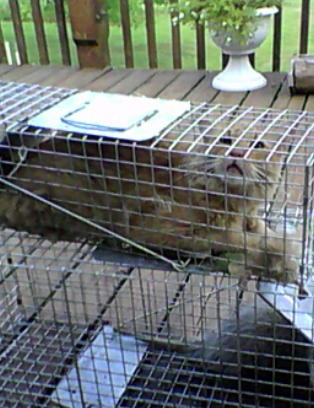 I first thought it had to be a Bobcat considering the sounds it was making. But it turned out to be a large orange housecat that must belong to the neighbors. I don’t recall seeing this cat here, but it was certainly a house cat.
Let’s see –that makes the score so far since last Monday – 5 possums, one coon and an agitated house cat that was really upset with me and with anyone else around. I still have about half of his fur in the trap. So tonight, we will set the traps again and see what happens – every night is a new adventure.
–Trapper John/Dad
What would you do?  Would you spend time & gas relocating these varmints or just “take care of them” like the Conservation Department recommended?

« Family History: Preserving Memories for Future Generations
Save those recipes… Your future self might miss my clam chowder… »